a. Ambient temperature and humidity

The resistance value of a typical material decreases as the ambient temperature and humidity increase. Relatively speaking, surface resistance (rate) is sensitive to ambient humidity, while bulk resistance (rate) is sensitive to temperature. As humidity increases, surface leakage increases, and electrical conductivity flows increase. When the temperature rises, the rate of movement of carriers increases, and the absorption current and electrical conductivity of the dielectric material increase accordingly. According to relevant data, the resistance of the medium at 70C is only 10% at 20C. Therefore, when measuring the electrical resistance of a material, it is necessary to indicate the temperature and humidity at which the sample and the environment are in equilibrium.

When the transformer winding resistance tester presses the material to be tested with a certain DC voltage, the current on the material to be tested does not instantaneously reach a stable value, but has an attenuation process. At the same time of pressurization, a large charging current flows, followed by a relatively slow absorption current for a long period of time, and finally a relatively smooth electric current flow is achieved. The higher the measured resistance value, the longer the time to reach equilibrium. Therefore, in order to correctly read the measured resistance value during measurement, the value should be read after stabilization or the reading value after 1 minute of pressurization.

In addition, the resistance value of high insulation materials is also related to the history of charging. In order to accurately evaluate the electrostatic properties of the material, when the material is tested for resistance (rate), it should be firstly de-energized and allowed to stand for a certain period of time. The rest time can be taken for 5 minutes, and then the transformer winding resistance tester is used. Instrument test. In general, for the testing of a material, at least 3 to 5 samples should be randomly selected for testing, and the average value is used as the test result.

During the test with transformer winding resistance tester, the wiring with low insulation resistance in the line is often improperly connected in parallel with the sample to be tested and the sampling resistor, which may have a large impact on the measurement results. to this end:

In order to reduce the measurement error, a protection technology should be used to install a protective conductor on the line with large leakage current to substantially eliminate the influence of stray current on the test result;

The test bench and the support are made of insulating materials such as polyethylene to avoid the test value being low due to such reasons.

After the high-insulation material is added with the DC voltage, the current passing through the sample is very small, and is highly susceptible to external interference, resulting in a large test error. The thermoelectric potential and the contact potential are generally small and negligible; the electrolytic potential is mainly caused by the contact of wet samples with different metals, which is only about 20 mV. Moreover, the relative humidity is required to be low in the static test. When testing in a dry environment, Eliminate the electrolysis potential. Therefore, when testing with transformer winding resistance tester, external disturbances are mainly the coupling of stray current or the potential generated by electrostatic induction. When the test current is less than 10-10A or the measured resistance exceeds 1011 ohms; the tested sample, test electrode and test system shall adopt strict shielding measures to eliminate the influence of external interference. 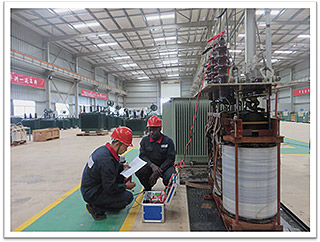 PREVIOUS：KRI recruits after-sales & testing engineers worldwideNEXT：Want a dry transformer with a longer life? These details must be noted
RELATED NEWS