After the input current and voltage are digitally filtered, the fundamental wave is taken out, and then the peak value of the resistor current fundamental wave, Ir1p=Ix1p.cosφ, is calculated by projection method. Due to the stable fundamental value, Ir1p is generally used to measure the performance of the arrester.

Select the correction angle φ=(φca -120°) / 2 to put this value into the main menu of the instrument;

Interphase interference also does not need to be compensated (i.e. the compensation angle is 0), and the performance of the arrester can be judged from the trend of the resistive current.

If allowed, you can only power up the phase you are measuring to get absolute data. And laboratory measurements do not require consideration of interphase interference.

The performance of the arrester can be judged from the peak of the resistive current fundamental Ir1p, but it is more effective from the current voltage angle Φ because 90°-Φ is equivalent to the dielectric loss angle. If the specified resistor current is less than 25% of the total current, the corresponding φ is 75°.

The effect of this error should be considered in actual measurements. Despite this interphase interference error, it is still possible to judge the performance of the MOA. If you only use Ir1p to judge, there will be several changes around 90°, so it is not reasonable to look directly at the angle. 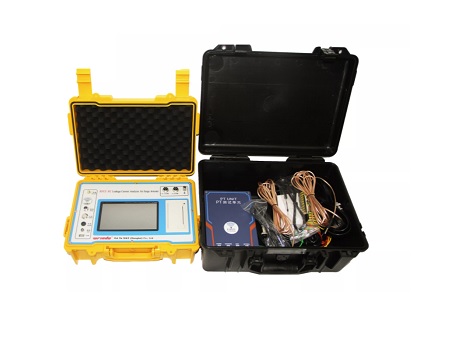 PREVIOUS：What is the reason for the loud noise when the transformer is running?NEXT：Which one is dry-type transformer or oil-immersed transformer right for you?
RELATED NEWS