What is the dielectric loss (Tan Delta) of a transformer and how is it tested?

1. The dielectric loss of the transformer generally refers to the magnetic dielectric loss. It mainly includes two parts: one part is hysteresis loss, and the other part is eddy current loss.

By Steinmetz formula hysteresis loss, Wh =Kh f Bm1.6 w/m3
Kh – hysteresis constant
Eddy Current Loss
It is the result of induced current in the core due to the electromagnetic induction in ferromagnetic material, which flows as loops of electrical current within the conductor.
Eddy Current loss, We = Ke f 2 Bm2 t 2 w/m3
Ke – co-efficient of eddy current
t – Thickness of the sheet


Eddy current loss can be reduced by using an iron core made of thin laminated sheets and material with high electrical resistivity. It reduces the induced EMF and the amount of current flow.

When the transformer is working normally, the magnetic field generated by the secondary side current and the main part of the primary current are offset. The magnetic field left after cancellation should be roughly equal to the magnetic field at no load (when the secondary current is zero) (assuming resistance and leakage flux are ignored). Therefore, the "magnetizing current" I mentioned above should be equal to the no-load current of the transformer.
Ideally, the no-load current should be 90 degrees behind the voltage, which is "reactive". But with the above losses, this lag is not 90 degrees enough. The complementary angle δ of this lag angle can also represent the size of the loss. The mathematical relationship is very similar to dielectric loss. 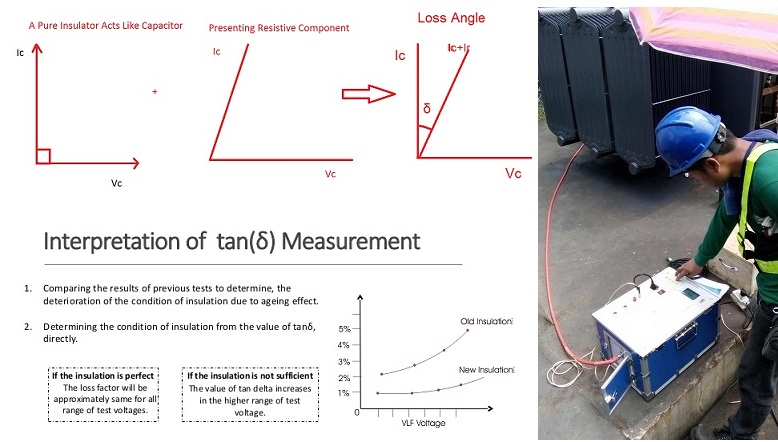 1. Iron Losses or Core Loss
Iron loss occurs in the transformer core due to the alternating magnetic flux. It consists of eddy current loss and hysteresis loss.

Referring the below equations of hysteresis and eddy current loss,

The values of Resistance R1 of the primary winding and R2 of the secondary winding are constant.

Then it is clear from the above equation that the copper loss varies with the amount of current (square of the current) through the windings.
3. Dielectric Loss

What Test Items are Required for 110kV/220kV Substation Acceptance and Maintenance Testing?

What Tests Must be Done before the Transformer Leaves the Factory?

What is the Purpose of Measuring the DC Resistance of the Transformer Winding?